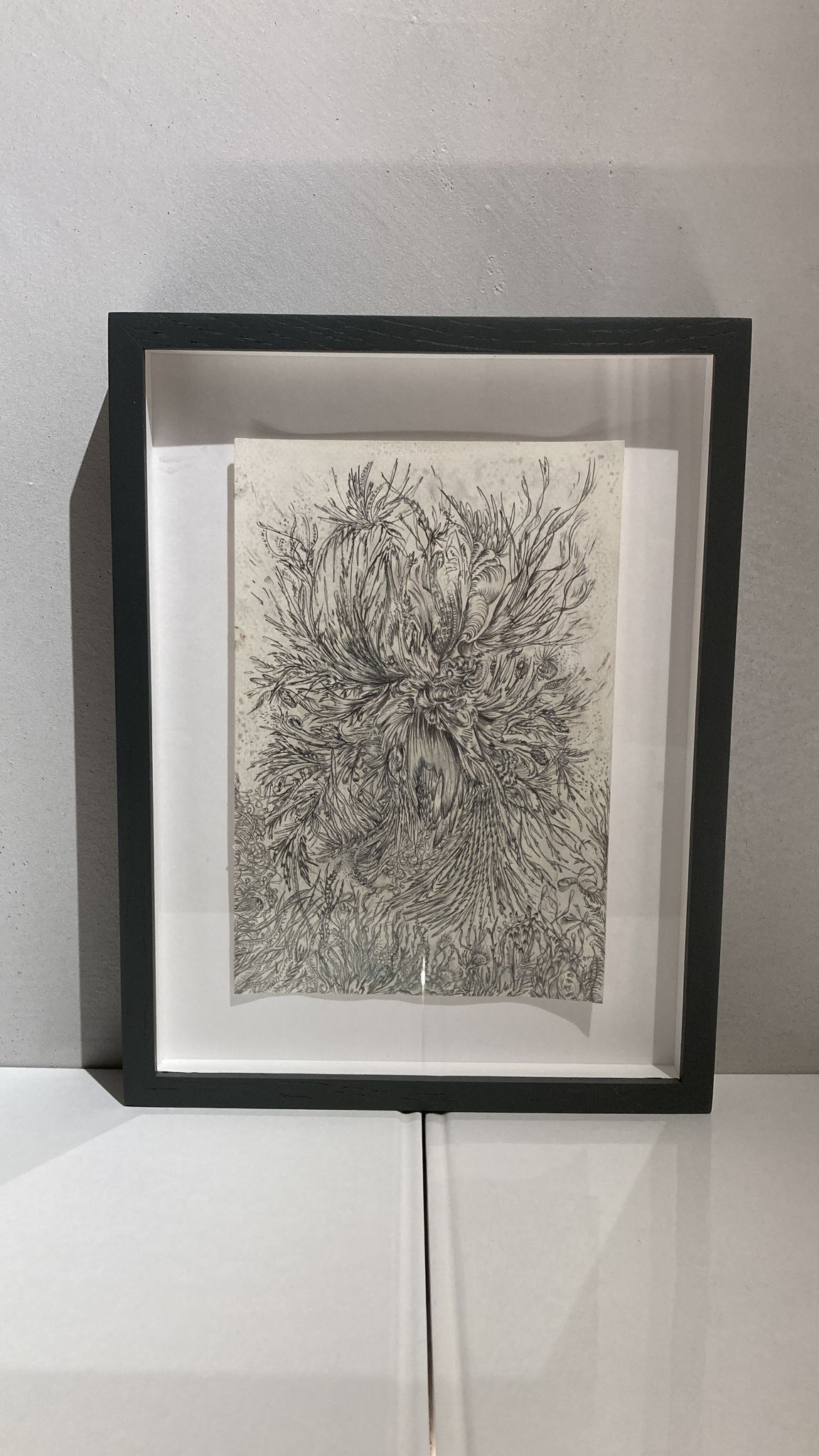 In recent years, Joke Raes and her surroundings collected 'love water' from all over the world. This special water comes from seas, lakes, canals, waterfalls or rivers. Regions like the Azores, Saint-Paul, Uruguay, the love canals of Venice or Bruges, Switzerland, the Netherlands, France, Bali, Canada or Croatia... Collecting in itself is a lifelong never-ending project. Joke Raes started this with the idea that water, like everything else in nature, is flowing and can connect people. Today, keeping water pure is golden and a challenge. Dynamic 'Waves' are common in her artistic work, whether in her sculptural work or watercolour drawings.

The love watercolour drawings arise both when collecting water but also when drawing intimately. Here, Raes strokes waves with a pencil tip across a leaf. She then proceeds to edit the drawing with iridescent watercolour and love water. The result can change colour, just as sunlight crackles on flowing water.

From a white gallery space to the Amazon forest, from Japan to a studio in Ghent: artist Joke Raes' artistic path can by no means be called straightforward. With a great curiosity for the connection between man and nature, she walks a path as fascinating and multiform as her works of art. Initially, Joke Raes studied theatre under Dora van der Groen at Studio Herman Teirlinck. Then a master's degree in visual arts at Sint Lucas, a bachelor's degree in textiles and finally a postgraduate degree at HISK.

Since 2016, she has had her studio in Ghent. In recent years, she developed her work during several artist residencies abroad. As a visual artist, she is passionate: she makes drawings, watercolours, ceramics, installations, performances and sculptures. All have equal power for her. Her oeuvre is an organic whole: sometimes the drawing comes before the sculpture, but just as often it is the other way round. Often the concept determines the medium, but it also happens that she searches for the limits and tactile possibilities of the material and this determines the outcome of the artwork.

A closer look at her work is dizzying with detail: each work is made with great attention, betraying obsession with the surface and everything behind it. Her organic imagery is that of the Amazon forest, of rampant, teeming nature in which man is one species amid hundreds of thousands of others - and yet Raes manages to keep an overview, as if she has borrowed the facet eyes of a dragonfly to know exactly where she is even in full flight. She doesn't get lost in the labyrinthine lines of a drawing, doesn't seem to hesitate as she glues thousands of plastic teeth - or parentheses, what are they, these little leftover industrial elements that fit seamlessly between the feathers, the willow cats and the plant seeds? Everything is given a clear structure, a rounded form that allows the viewer to construct their own narrative. Each time, she looks for duality, tension and also balance within an image.